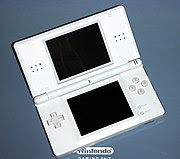 I have the Nintendo DS and the Nintendo DS Lite handheld games and am very happy with the purchase. My son and I play against each other regularly and it's fun, the other day I tried playing on the internet using my new WiFi connection and that was mixed. It took a while to find a game to play. The games I have are: