Showing posts from December, 2008
Show All

December 28, 2008
I'm fascinated with kinetic typography , especially the work of Lawrence Lessig . If you like to see more of the genre you can go search google. I wanted to do my own. I could always try using open office Impress or PowerPoint, but they are too limited in what they can do and repeating the same fancy effect on two slides takes twice as long. My first attempt was to use the Processing language, but it was a lot of work and the language is less than ideal (sort of old school). My second attempt was with PyGame , which I've been meaning to learn more about. It could work, but I found that the font's weren't anti-aliased (but I think I was doing it wrong) and creating the library was proving to take a long time. The I remembered Bruce , a presentation program written in Python and supposedly using PyGame . When I downloaded the latest source, I found that it was using Pyglet and Cocos2d instead. These two were exactly what I needed, powerful and flexible and I coul
2 comments
Read more

The rise of programming for artists? 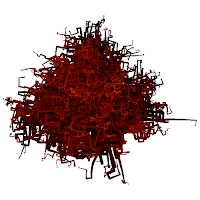 I've been using the Wiring language for doing my Arduino programming and this week I played a little with it's big brother, Processing . I think Processing is a nice tool for beginners and has a great set of libraries, but not my cup of tea for programming. I think what it offers is one tools set (including IDE, libraries and language) so you don't have to waste time figuring out which libraries or IDE you'll need to download as well. I've also just come across Context Free which is a language for making pretty pictures like the one above.
Post a Comment
Read more

December 10, 2008
I bought two OLPC (aka XO) laptops and gave one to a needy child through the G1G1 (Give One/Get One) promotion. In fact I gave two laptops since Google matched my donation (thanks Google!). It's already arrived at my Mother's house, it'll be interesting to see how it's changed since the beta machine (which I still have, but I can't upgrade anymore without bricking it). Maybe the dollar will go down in 2009 and the price of materials as well so that they can start selling the laptop at something near $100.00.
Post a Comment
Read more
More posts