Showing posts from February, 2006
Show All

February 15, 2006
Oracle buys sleepy cat which makes Berkeley DB. Berkeley DB is another backend to MySQL recently purchased by Oracle. It can also be used as a database on it's own (for example subversion uses Berkeley DB as one backend, but now has a better file based version of their own). These moves by Oracle are troubling for MySQL developers, there's a chance that Oracle will drop these products (if that's even possible) putting MySQL in a bind. In any event it will make people think twice before using MySQL. But it's good news for PostgreSQL which may attract more developers since it's future is far more certain.
2 comments
Read more 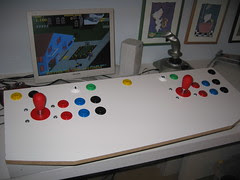 The control panel is done and it works. It took all weekend and I'm still a little sore. I still need to glue a litte bit of trim around the edges. The advanceMENU is just brilliant. It works like a charm and has lots of configuration options. The control panel is designed to fit on top of the keyboard so that you don't need to move the keyboard and mouse to play. I'm fairly happy with the button placements but I feel that the buttons could be a little closer together (they are 5cm apart). I made a mistake putting the top buttons too close to the edge, so when I put the cabinet together I had no room to angle it the way I would have wanted. I think I need a finer saw blade for cutting the wood as well, the edges are chipped a little in some places. The wiring took a long time, but I was at least able to do it in front of the TV. For each connection you need to strip both ends and crimp the connector. A trick I figured out only later was to shove a small screwdriver blade
Post a Comment
Read more

February 13, 2006
If you've never used flickr.com , you should try it - it's very good. It's a place to store your photos, in a way that you can also share with friends and family. I've used it for a little while and it's the only way I've been reliably able to send photos to my mother. I tried using e-mail but depending on the e-mail program she uses she doesn't see the images. I've tried hosting it on my site and then put links to it in e-mail, but if I put in actual <> tags tags it's likely think it's spam and if I just link to them, my mother doesn't always understand that the little blue underline text can be clicked on. And it still thinks my e-mail is spam. Now I can just say that there's more photos on Flickr and she knows what to do. I recently lost two hard drives (my drive and my wife's) and a lot of pictures went with them (one was a backup of the other). All I have left is a few backups that I did on CD and the images on my fl
Post a Comment
Read more 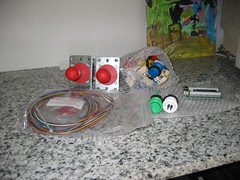 My joystick, buttons and IPac interface card arrived in the mail. I've done a lot of research on building an arcade cabinet or control panel and I can tell you there's no definitive guide out there on the internet for building a control panel. In fact it's worse, many (maybe most) people seem to their own layout and usually get it wrong . A common mistake for two player setups is to have player one with the joystick on the left and buttons on the right (correct) and player two with the joystick on the right and the buttons on the left (wrong !). On top of that, most people put up photos of their cabinet but not the plans. Or if they have plans it's for the cabinet and not for the control panel (i.e. the buttons and joysticks). I had the following constraints for my son's control panel: I wanted it as small as possible, but no smaller. I want it to play most games with a joystick including SNES and most PSX games. This means at least four buttons per player. I w
1 comment
Read more

February 09, 2006
I've known that the non-diet coca-cola tastes like crap in the US and in Canada because it uses corn sweetener instead of sugar. I also knew that they use corn syrup because it's cheaper than sugar, now I know why: ADM collects welfare because of two cleverly designed special deals. The first is the government's mandated minimum price for sugar. Because of the price supports, if a soft drink maker wants to buy sugar for its soda, it has to pay 22 cents a pound -- more than twice the world price. So Coca-Cola (and almost everyone else) buys corn sweetener instead. Guess who makes corn sweetener? ADM, of course. Now guess who finances the groups that lobby to keep sugar prices high? link We use ethanol here in Brazil. Getting it from sugar cane is far more efficient and cheaper than with corn but: ADM's second federal feeding trough is the tax break on ethanol. Ethanol is a fuel additive made from corn, kind of like Hamburger Helper for gasoline, except that it's mor
Post a Comment
Read more

The IT Crowd TV Show 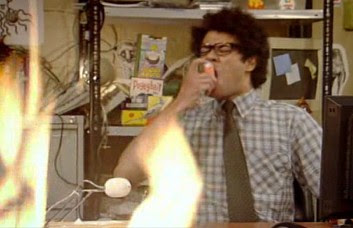 The IT Crowd is a great new TV show that reminds me a little of Fawlty Towers , but with IT geeks instead of hotel owners. Here are some torrents: Episode I & II Episode III More great British humour: Red Dwarf - I loved this show Chef! - I love it when chef yells at his employees, the insults are just priceless The Office - I've only seen one episode and it didn't bowl me over Top Gear - I don't know how they keep make car reviews so entertaining Dr. Who - haven't seen the new version yet. Blackadder - Rowen Atkinson is a genius, but I never fell in love with the series. Monty Python - have to mention the flying circus. Via BoingBoing
Post a Comment
Read more 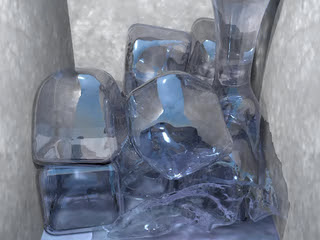 February 09, 2006
What's So Bad About Microsoft? is a long article with lots of links. If you ever need some amunition to convince someone to use FOSS , this article will help. From a Software User's Perspective Bloat Backward incompatibility Perpetual upgrading Vaporware Hostile treatment of customers Predatory practices Bundling of inferior products Bugs, bugs, and more bugs Insecurity From a Technical Perspective Closed "standards" Mutilation of existing standards Lack of innovation From the Perspective of Everybody Else Attempts at taking over appliance markets Attempts at buying the public's trust Outright deception Common Defenses of Microsoft Debunked Microsoft is ahead because their products are superior Microsoft should not be punished for its success
Post a Comment
Read more

A while ago I was between jobs and visited a cousin who has a travel agency . They were thinking of setting up a web site etc. and I looked at how I could help. One thing I noticed is that that they do a lot of correspondance by email. One of the biggest worries for a travel agency is screwing up a date or destination, etc. So I was thinking how to automate some of this. I'm still not sure how to do it, but this Thunderbird email extension seems like it might help. Basically, you can quickly make canned text responses where information like the person's name is automatically replaced in the message. Looks like a real timesaver.
Post a Comment
Read more

February 07, 2006
Something I've known for a long time was that stretching before exercise became popular in the 80s, yet there was no scientific studies done to show if there's any benefit. I know this because I read an article on my wife's desk (she's a physiotherapist) basically saying this exact thing - there's no proof. In fact, anecdotally, I don't normally don't do much stretching but when I have I've often been injured. I probably overstretched and stretched because I was already feeling a bit of pain so I decided to stretch that day so it's not good evidence against stretching. On a podcast that I listen to Quirks Quarks they had Dr. Ian Shrier from McGill University whoc mentioned that [stretching is] old, and bad, advice. Research has shown that pre-workout stretching decreases performance and doesn't protect against injury. What I got from the podcast and the article was Stretching before doing a sport decreases performance (by a couple of percent)
Post a Comment
Read more

February 07, 2006
People do some annoying things, sometimes without realizing it. As a public service I'll list some of them, so that if you find yourself doing these things you might change your habits. For example, in Canada I lived in an apartment and the neighbor upstairs would wash the dishes, and every time she turned on the tap it made that annoying squealing sound. If she had opened the tap a little more it wouldn't have made that sound. I'm sure she didn't realize that her neighbors were annoyed by the sound coming through the pipes and it was just a habit to open the tap until it started squealing. Another common annoyance which maybe 50% of the people don't know they are being annoying is when you are shopping and there's a line of people waiting to go through the cash register. The cashier scans and bags all the items and then, only then, does the shopper open up her purse to get out her checkbook and start writing a check ("What day is today?"). Some pe
Post a Comment
Read more