Showing posts from October, 2006
Show All

October 26, 2006
Wikipedia is my favorite source for all kinds of information and they did a nice job on the country codes. Unfortunately, the page goes by the name ISO 3166-1 so it's not as easy as it could be to find. Link
Post a comment
Read more

October 25, 2006
Ms. Dewey is a really well done flash application that happens to do web search (badly). What makes it so compelling is the beautiful and funny Janina Gavankar who becomes your search avatar. The first search I put in was for "hammer" (I don't know why) and I was amazed that she actually pulled out a hammer! Turns out this is an experiment by Microsoft. Here are more funny searches to try: ho - gives a great bleeped out scree. you are so hot - try more than once. illegal drugs - more than once nude - do a few times and she'll undo a few buttons, bring out a crocket mallet. george bush dance - try a few times, she'll do the robot run - try a few times and a monster might chase her Janina Gavankar murder storm - she'll get rained on arts - shoots a paintball beer - fills up a big beer mug. comics tv safety christmas Digg Metafilter
Post a comment
Read more

Sorry for all the posts

October 11, 2006
I just realized that I've been posting to the wrong blog these past few weeks, so I'm copying all the posts over. Seems that google reordered my blogs so I kept clicking the first blog, which was the wrong one.
Post a comment
Read more

October 11, 2006
On of my favorite Canadians, David Suzuki (who wrote an article for my dad's magazine - Chimo!) wrote this article. In it he responds to complaints, by others, that some politicians have taken research that his foundation has published and and used it in their own policies (without reference etc.). Basically, his response is: take my research on enviromental and social concerns, please!
Post a comment
Read more

October 11, 2006
I just learned of two new (bad) programming styles I never hear of before: Cowboy Programming : "It is characterised by a single programmer jumping into the writing of the software often working from his own idea of what the software should do." Shotgun Programming : "The way a shotgunner approaches programming is to blindly start shooting first and ask questions later. And when something does work, well, don't sit around worryin' about why, just start doin' it again!". I actually worked with more than one person who coded like that. If left alone for two weeks (on a problem that should take two days) I got code that worked (barely) but was so fragile and full of bugs that suggesting a change would bring tears to their eyes.
Post a comment
Read more 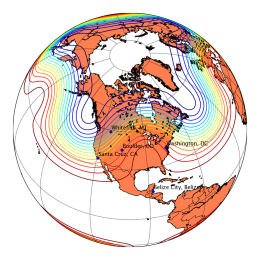 My favorite plotting package combination ( matplotlib , SciPy and Python ) has a neat example how to use the 'basemap' toolkit to make maps. In 18 lines of code you have a globe. Another 12 you can show some cities and another 10 lines and you are plotting curves along the surface of the globe. Take a look . via Simon Willison
Post a comment
Read more

October 11, 2006
Stevey Yegge has a long post rant about agile programming on his blog. It's a long post but it's funny as hell. ... I only had one high-level takeaway, one marketing message I wanted to get out to developers everywhere: It's OK to say No to Agile .... Well, any time you find a community whose overall Humor Level is rated at "Homeland Security", it's a pretty good indicator that you don't ever want to have to deal with them. Ever. As I've done for a great many other programming languages, I've bashed on Perl's technical weaknesses at length in the past. To my continued amazement, the Perl folks are the only ones who never get upset. They just say "Haha, yeah, boy, you're right, it sure is ugly. Heh. Yeah, so, um, anyway, I'm going to get back to work now..." It's awesome. I've gained so much respect for them. It's almost enough to make me go back to programming in Perl. Well, almost. If there's one thing I&#
1 comment
Read more

October 11, 2006
So Google buys YouTube ! I read the rumours, but didn't believe it. Google video is so much better. If Google would have waited a few more months it would just implode anyway (or Yahoo! would have bought it). Then I read that YouTube signed a deal with Universal, Sony BMG and CBS, well that sweetens things a bit, maybe. Truth be told, I have no idea why YouTube had become so popular compared to say, Google Video. Whatever the reason, YouTube got a great deal of the market and is a prime place for Google to advertise. Also, Google's purchase may have happened solely so that it's arch rival, Yahoo!, did not buy YouTube, and thus become the defacto leader in online video. In either case, online video is immensely popular and important and now Google is the leader, by far.
Post a comment
Read more

Hole in the Wall 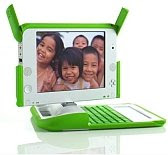 I came across this article from business week (2000!) it asks the question: "What would happen if you put a computer in a public place with a high speed internet connection?" The answers are surprising. Kids (mostly 6-12) in slums who can't read English were able to draw pictures, play music and browse the net. The computer had no keyboard and was protected behind a wall, and yet it was a success. Kids used it and when they suggested taking it away the parents said "no!". A failure, in my estimation, would have been if the computer was left running and nobody used it. I think this bodes well for the OLPC project. The big difference is that the $100 laptop would be one kid's computer, a computer they can keep and take home. They can explore the world and their mind at their own leisure. They can download tens of thousands of books (from the Gutenberg Project , for instance) and you don't have to worry about the libraries budgetary constraints, or i
Post a comment
Read more

October 01, 2006
If you tried the RSS feed reader called Google Reader before, and didn't like it (like I didn't), you should try the new version which has just launched, it's great. It works a lot more like Bloglines which previously was my reader of choice. But bloglines has lots of bugs and the user interface is pretty clunky. Google Reader is fast, AJAX y and has great keyboard support. I've stopped using bloglines and am now hooked on the Google Reader.
Post a comment
Read more
More posts