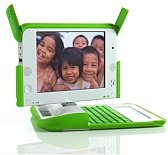 The One Laptop Per Child project has been going ahead steadily. There are sample boards and people are working on getting all the applications to behave properly so that it can go to sleep when idle. Lots of programs, including Python+GLib, wake up every 100 milliseconds making it difficult for the laptop to go to sleep and thus use less power. Fixes are in so that the programs that are installed on the laptop behave properly. The project is also creating it's own BIOS which doesn't use ACPI to suspend/resume, they want something even faster. There a tickless patch to the kernel by RedHat which should bring the laptop to less than 3 watts of power when idle.
In other news, India says they are going to make a $10.00 laptop, in three years! Yeah, right. By that time the OLPC laptop should cost around $50.00 anyway. My take is that India is still sore about their flopped attempt of a cheap laptop - the simputer, and their previous experience with the MIT media lab. They have rejected the OLPC outright which is unfortunate, but such is politics.
link
olpc