October 07, 2005
I've released an updated version of wxOptParse for your downloading pleasure. This is part of my strategy of releasing early and often. I just realized making this post that there was an index.php file in the directory, so if you go to the directory without entering index.html it'll say that my project doesn't have a homepage, ouch. I removed that file so everything should be alright now.
The neat addition in this version is an example running any program using wxOptParse. I give an example using the GNU find command which is particularly handy since you use find a lot and it's always too many parameters. Also I put in some useful help in the dialog. 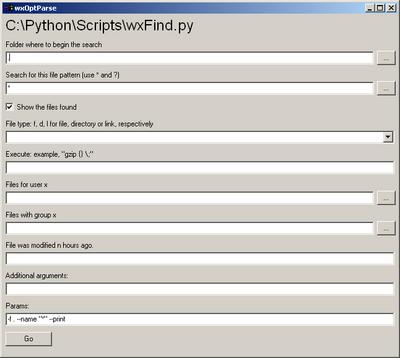 I noticed creating this blog entry that I have a few problems with the install. First, the wxversion is causing problems on the Windows version. Also, the setup.py file doesn't seem to do the right thing on windows, I'll have to look into that a bit more.