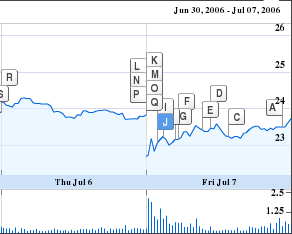 I was a little surprised that AMD's stocks went down today because of a small forecast warning for the next quarter. I like the AMD chips (more than the Intel chips) because they are faster and cheaper and came out first with a good 64 version (although for laptops I hear the Intels chips are cooler). What I really interests me in AMD is:

Anonymous said…
is that an AMD chip in the new Dell ad?