January 27, 2006
I bought two top-of-the line Ultimarc Mag-Stick Plus, joysticks and a slew of buttons plus the I-Pac 2 interface which takes in all the buttons and joystics and turns it into USB keyboard commands. I even went and bought the wiring kit even though I could get that kind of stuff here (and I have two crimping tools already). Purists might say that the joysticks are a little different than what you get at the arcade, the throw (how much they move) is a little shorter and it uses a magnet instead of springs. They are, in fact, better than what you would get in the arcade and should make for better playability. I remember walking away with sore arms and shoulders after playing Robotron for hours. 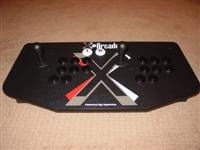 The bad news is that I'm not going to build an actual Arcade Cabinet, instead I'll just build a arcade console (similar to this). There are several reasons for this:
I think the whole deal is a good investment. I spent about US$183.90 with shipping for two super durable joystics and buttons. Once I build the thing we'll have years of enjoyment, I'll have some bragging rights (worth the money alone), and I should have no problems selling this thing for about what I spent on it.
If I do decide to build a cabinet I still have choices. I can either gut my console or I can build the cabinet with new controls - then I can have one at home and one at the cottage. The cabinet in a few years would also have a high resale value (depending on how good a shape it's in). In three more years I wouldn't be able to give away Victor's old computer, but put in in a cabinet with 5,000 games and some joystics and all of a sudden it's worth something.
What about a trackball and a spinner? Unfortunately, the price goes way up for these things which for me have limited use. I'd need to buy the Opti-PAC inteface card plus a trackball (US$94 combined), a good quality spinner is also about US$80, although I can also build my own using an old hard drive and an old mouse, cool. I may eventuall try to make my own spinner, might be a fun project.
If When I do make a cabinet I think I'll go for the spinner, a light gun and a few extra front mounted USB ports to plug in extras like a keyboard, mouse and dance mat. I don't think I'll make a keyboard drawer, since I prefer entering computers via SSH or VNC, like a real man. With regards to the trackball, I've never really those games (centipede, marble madness, crystal castle) and it takes up too much space on the board - how am I going to play Robotron if the joysticks are too far appart? I'd build the cabinet with space in front so that the unit can double for some storage (for at least the light gun and game mat). I really like the game Spy Hunter and Colin McRae Rally and it would be cool if I could find an attractive way to mount my USB wheel on the front with the pedal.
I'm really glad we had my son Victor, otherwise I don't think I could get away with any of this.