The Electric Unicycle is the Perfect Personal Transporter

Way back in 2001, the Segway "human transport", code named Ginger (think Ginger Rogers), was all the buzz.  Segway promised to change the world with it's two-wheeled self-balancing personal transporter. It was amazing, but pricey ($5,000 USD) and slow max of 16 km/h. However, self-balancing really is the way to go, but the battery tech wasn't there in 2000's. 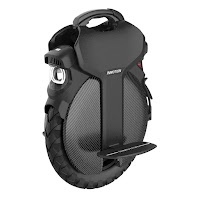 Electric Unicycles, like the Inmotion V11 above, is the natural evolution of the self balancing Segway. It has bigger tires (18") which helps get over obstacles and absorb shocks. It also has a suspension which absorbs even more.

What makes an EUC the perfect transporter is that it is:
Let me go over each and compare to other electric vehicles:

You can't get much smaller or lighter without going for a smaller wheel (electric shoes?). You can just throw it in the trunk, which makes it a lot more convenient than an electric bicycle. And an electric motorcycle takes a lot of space in the garage.
It's not as wide as the Segway or a hover-board, so you can go down narrow paths. It's nimble and most can go off-road as well as ride on streets.
This compactness also means you can (often) bring it inside a store and walk it around with it's handle, like luggage. No one will bat an eye. Having to lock it up outside, like a bike, is something you may never have to do. Smaller EUCs can be even be put in a locker.

Compared to a hover board, one wheel or an electric scooter, there's a lot more room to add batteries. A really large EUC like the Veteran Sherman can go up to 200 km. 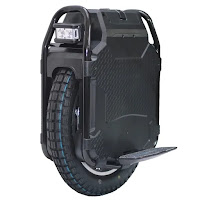 Veteran Sherman.
I considered this EUC but is heavier than I would like.
Bigger batteries means more cost, but also means longer life for the batteries themselves. If you regularly charge to 80% and go only as low as 20% your batteries will last for decades. It's when you need to fully charge all the time and often go down to nearly 0% that you kill you batteries in short order.
When the battery is low, the EUC may struggle to maintain velocity, which also means it'll struggle to keep you upright. That's why all EUCs now will force you to slow way down when the battery gets low.

That Veteran Sherman above has a monstrous 20" tire, but EUCs can go as low a 14". A big tire means you can go over bumps and even up and down stairs, if you are skillful enough. It also naturally absorbs more shocks. This is a big advantage over electric scooters, which typically have smaller wheels.
Watch Chooch ride like a daemon

An electric skateboard requires that you hold a speed controller in one hand. A bike or scooter means your are holding on to a bar with both hands. Having your hands free is real freedom. Need to put on gloves or take a photo with your smartphone, you can do that without slowing down.

It's treated as a bicycle, which means, in most places, you can't ride on the sidewalk, but does have some advantages. I considered buying an electric motorcycle like the Zero, I have a motorcycle license, but not only is motorcycle cost high, but you need to pay for insurance on it every year. Not so for bicycles or EUCs.

You can be thrown from you EUC if you are not careful. Because you are closer to the ground you don't have a lot of time to roll and are more a little more likely to face-plant. This means you really should suit up before riding, this means:

Compared to a scooter, it takes a while (maybe an hour) to get the hang of it. To really be "one" with the wheel will take hundreds of kilometres.  For me this really isn't a downside. Learning difficult things
is frankly more rewarding than going the easy route.

So I just put down $2,700 CAD for an Inmotion V11. This seems pretty pricey, but a good e-bike is similarly priced. And the Zero motorcycle costs 10 times more!
Since it looks like there will be little to no skiing this winter, learning to ride this thing (in the snow!) will be something for me to do.
I'm really excited about this EUC. I think going through the woods will be lots of fun. Going to the corner store will be fun. I may even bring it to the boat so we can explore nearby trails when we anchor.  I used to commute everyday in my motorcycle, back when working in an office was a thing, and I'm excited to do this with the V11.