Halloween Fun with Arduino and LCD

November 02, 2009
For Halloween this year I did two things. I redid my spinning POV hat. I basicallly, just made it stronger, and lighter since it fell apart last year.  To make it lighter I used the Arduino Pro (5V) and two coin style batteries (CF2032) instead of the normal Arduino and the heavier 9 volt battery.  I didn't have much time to perfect it so the effect wasn't perfect (code).  I really need to put a sensor on it that senses every time it spins around for it to work correctly, at the moment I just guess how fast it's spinning and put in a delay based on that guess.  What came out doesn't look that hot: 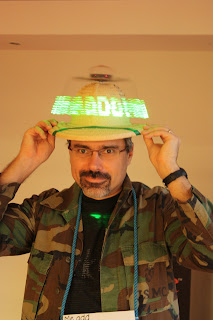 The second device I made was a little more successful. It was a 16x2 line LCD from sparkfun (GDM1602K rev 2.1) display connected to a button so that every time you pressed it one more friend would be added.  I would go up to people and say "Press the button to be my friend on orkut". 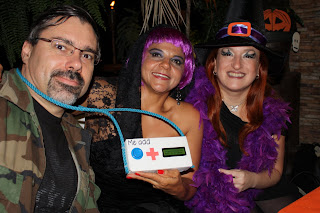 There's a colloquialism here in Brazil: "Me Add" which is both a shortening of "Me adiciona" and a perversion of  "Add Me" in English.
Two additional items that are still in the mail that might have made things even more interesting are this big red button and the wave shield to make some interesting noises when the button was pressed. Maybe for next year.
The pages that helped me the most to set this up were both from arduino.cc (LCD, button) and the code is here.
Here's what it looks like underneath: 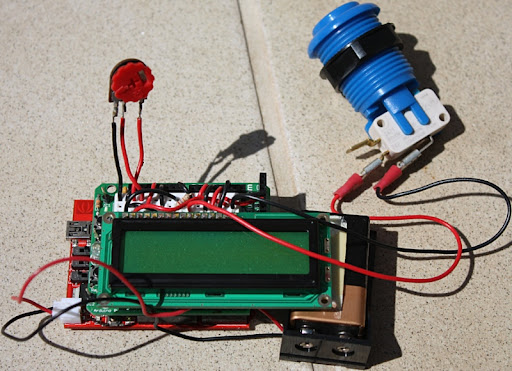 I stole the button from the Mame console I made before. The potentiometer is needed to get the contrast correct (otherwise the text looks either black or empty). I wired the LCD back-lighting so that it was alway on and at 100% (since Halloween is at night). The resistor is just for the button.
Too bad there's no trick or treating in Brazil, otherwise I would have made something scary as well.
Arduino Halloween