August 13, 2009
At Google we have lots of internal tools, many for the command line. On occasion some googler will take one of these tools and make it into an internal web site.
Usually, when this happens I think "Why? The command line tool is much more convenient!". At first, the web site isn't all that useful, but week by week, features get added until the web version is faster, and has more useful features than the command line version.
I started thinking that I have some old programs that I wrote, years ago, which could be better off on the web.
One program I did this to is mm2notes which takes FreeMind MindMap and creates meeting notes. The original version was only for the command line. Already I can see the web version could be far more useful than running from the command line. For instance, I can e-mail the action items to the people that have something to act upon.
Another program that I wrote, even longer ago, was a program to help me learn Portuguese. It had two parts, one to train on the conjugation verbs, the other on writing checks. I wrote it in C++ and and MFC, so you have to run it in Windows.
The other day I had to write a check and I remembered that old (2005) program. I figured it was time for me to learn the Java version of the Google App Engine version with GWT and so I converted the code to Java and GWT.
It's really quite pleasant working with GWT, I have so say. This whole program is client side, you could be practicing writing checks on the airplane. If you run the program in a new version of Firefox or Safari you'll also get the benefit of @font-face css tag which will download a handwriting like font (which I purchased a long time ago from Corel).
The web site is escrevecheque and the source code can be found here. 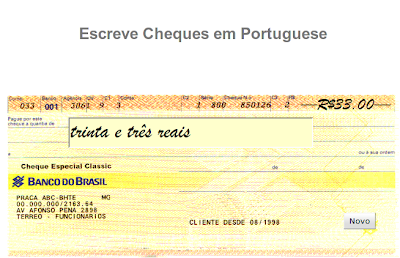