How I'd Improve the Nintendo Wii 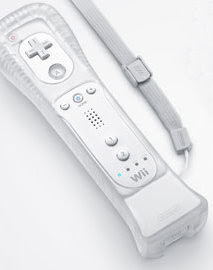 Nintendo is coming out with the Wii MotionPlus, which improves the already revolutionary controller. It started me thinking on what else Nintendo could do.

For instance, one or two cameras could be mounted on the TV pointing to the players. This has been done before and makes for some fun games. It also could be used to improve the playability of the games. Imagine a sword fight where you can physically jump out of the way of the sword!

Today if I want to play a quick game on the Wii Fit, I have to:
It could be a lot easier. Putting in a DVD to select a game seems sooo 2001. I can't remeber the last time I put in a CD to listen to music. It should be more like this:
Wii Fit could now tell if I'm doing the posture correctly confirming my position in the camera. Now instead of saying "You have good posture" it could say "You have lousy posture, but your balance is good".
games

Anonymous said…
Interesting thoughts but I'm already satisfied with the Nintendo Wii. Love the Bowling game included with the console (got the limited edition pack). I guess we'll know more at E3. HD ? Camera ? Who knows...